Although I was born and raised on Vancouver Island, I have now spent almost half my life working as a Rural GP in Lillooet.  Although I first missed the coast (mostly the ocean, definitely not the crowds and property prices), I wouldn’t want to live or work anywhere else in BC now.  I have been interested in both birds and photography for most of my life (interests initially fostered by a father who loved photography and both parents who cultivated in me a love for nature and the outdoors at an early age).  Both interests have waxed and waned over the years.  My dedication to both has only really taken off over the last 15 years.  It was Ken Wright who encouraged me to be more accurate and to record my observations and the Breeding Bird Atlas that allowed me the time off to focus on birding and bird photography.  A big thanks to Dick Cannings for asking me to be the BC Breeding Bird Atlas Regional coordinator for our area.  I use Nikon gear only because I have invested a lot in lenses over the years.  The photos I present here have been taken with a wide variety of lenses and Nikon cameras.  Some are handheld, some on a tripod.  As Nikon took awhile to make image stabilized lenses, I’m used to lugging a tripod out into the field and have become quite adept at having it ready when needed.  All of the photos have been taken within an hour’s drive of my residence.  While some have been from planned visits to known sites, many have been pure serendipity while walking the dog.  My current camera body is a Nikon D810.  I eagerly anticipate Nikon’s new D500, their replacement for the D300s.  All photos dated before 2014 were taken with the D300s.

I am honored to be asked to provide a few photos for the BCFO.  I have been a member for quite a few years now, but sadly rarely am able to participate in your organization due to my limited time off.  That should change with retirement, but if I keep buying camera gear, that isn’t going to happen anytime soon.

My website has not been updated since 2010, as I seem to enjoy taking photos more than sitting in front of a computer (which I do on and off all day at work). 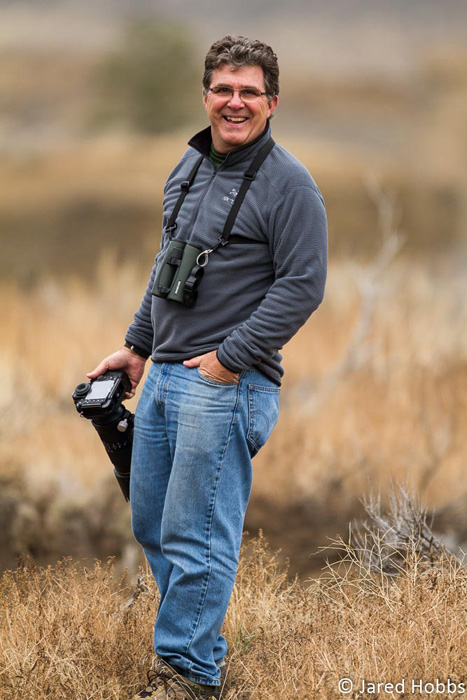 1) Common Merganser with chick.  June 9, 2013.  Lower spawning channel, Lillooet BC.   I knew this mother had fledged her young and knew the Lower Spawning channels was where she was choosing to keep her brood safe.  I hid in the brush along one of the channels and waited for her to pass by (after first locating which channel she was using – I rarely spend lots of time waiting).  She had to cross a log before she came in to view.  This was the only chick still on her back.  Some of my other photos had all of the chicks on her back but I like this one best.

2) Northern Hawk Owl with Pygmy Nuthatch.  May 7, 2012.  Location near Lillooet.   I had discovered this nest during the BBA (Breeding Bird Atlas) of BC.  As far as I know it is the most southwesterly nesting record for this species and certainly a first for this BEC zone.  How to prove it? – well the nesting tree helped (a dead Ponderosa pine), but the Pygmy nuthatch arriving to check out the tree was even better.  I was using a long lens on a tripod.  I have lots of the nuthatch exploring the tree, including one of it on the end of the branch with the Owl staring right at it, but this is the only one where both the Owl and Nuthatch are in the relatively narrow in-focus range for this lens.

3) Long Billed Curlew nest along the banks of the Fraser just north of Lillooet.  During the Breeding Bird Atlas, I would walk the edge of the fields until a Long-billed would start calling.  On this occasion I just sat down and waited.  This bird is performing a distraction display much like a Killdeer’s but much more impressive.   I left after obtaining this shot.

4) Northern Pygmy-owl with likely a Meadow vole.  November 30, 2013.  I have lots of Pygmy owl photos.  This one is my favourite.  This was a planned trip with a photographer friend (I am usually on my own).  We knew roughly where the owl was.  An example of the benefit of living and photographing without the crowds.  We watched this owl hunt and consume several voles during our time with it. Taken near the Old Diamond S Ranch by Pavilion lake.

5) Western Screech-owl young.  June 29, 2012.  A known nesting site had fledged 4 young the preceding year (we had watched the event on the same night as the Vancouver Canucks hockey riots were taking place).  Due to work I had missed the fledging this year although I knew the nest had been active.  A local had told me about some “small owls” down by the BC Hydro campground about a month after the nest was vacated.  Myself and a friend found these 4 owlets roosting on a Cottonwood branch above one of the trails in the area (it turned out there were actually 5, one was up higher in the cottonwood).  Folk were walking right underneath them, oblivious to their presence.  This photo is now on a sign in the campground in an attempt to educate campers not to cut firewood in the Cottonwood grove where the adults take the young after fledging.  BC Hydro campground near Seton Lake.

6) Western Screech-owl adult.  June 29, 2012.  Taken about 10 meters away from the roosting young in the same Cottonwood grove.  The camping is free but the firewood is not.  It appears that the educational sign is now working thankfully.  Lillooet is possibly one of only a few places in BC with records (many of them breeding) of every owl that occurs in Canada with the exception of the Eastern Screech.  Sadly the Spotted Owl is all but extirpated in our area.  I have been fortunate to have managed to photograph all of them in Lillooet except the Boreal Owl and Burrowing Owl. 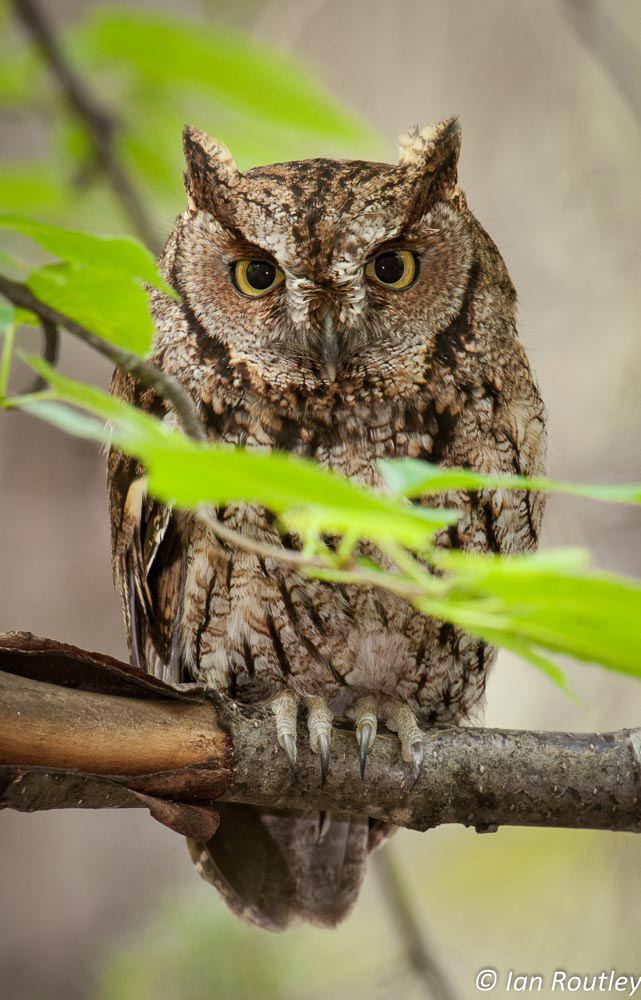 7) American Avocet with young.  June 18, 2015.  North of Lillooet.  This photo was taken the greatest distance from my home.  Still only an hour’s drive though. I have been photographing this colony for over 8 years.  It is not easy to get to which is a good thing.  Years ago I went on  a BC Nature birding trip to Soap Lake Washington and saw my first Avocet in North America.  I was lucky back then to get mating photos.  I never imagined the same birds would be so close to my home and I would more than duplicate those photos in Canada.   The downside of this area is that it is thick with mosquitos.  Ken Wright and I went  there this summer and he said it was worse than his time on the Alaskan tundra.   I have better photos of adult Avocet, but I love the youngster along the shore.

8) Lewis’s Woodpecker with Saskatoon berries.  August 9, 2012.  Grasslands north of Lillooet.  When I attended the first meeting of the BBA coordinators in Delta, one of my fellow participants expressed doubt that there were Lewis’s woodpeckers in our area. The challenge was on.  I had long had them arrive in my yard during migration in the spring and fall (which sadly has changed now that we have lost most of our big Ponderosa to Pine beetle).  I have been photographing this nest now for over 5 years.  All of the Ponderosa around it are down, but this wildlife tree is still standing.  Ken Wright and I have found many more nesting sites.  The difficulty is that they are often on private land and often down in the Fraser Canyon in steep terrain with temperatures over 40 degrees C during nesting time.  Interestingly, over the last 3 years, this nest cavity is first used by European Starlings and then the Lewis’s after the Starlings have fledged.  Both this Lewis’s Woodpecker and a Mountain Bluebird (nesting in my yard) were bringing berries to their young around fledging time.  I wondered if the parents were tired of feeding their young, and much like parents whose 30 year old has returned home to live, were trying to give a hint it was time to fly the coop. 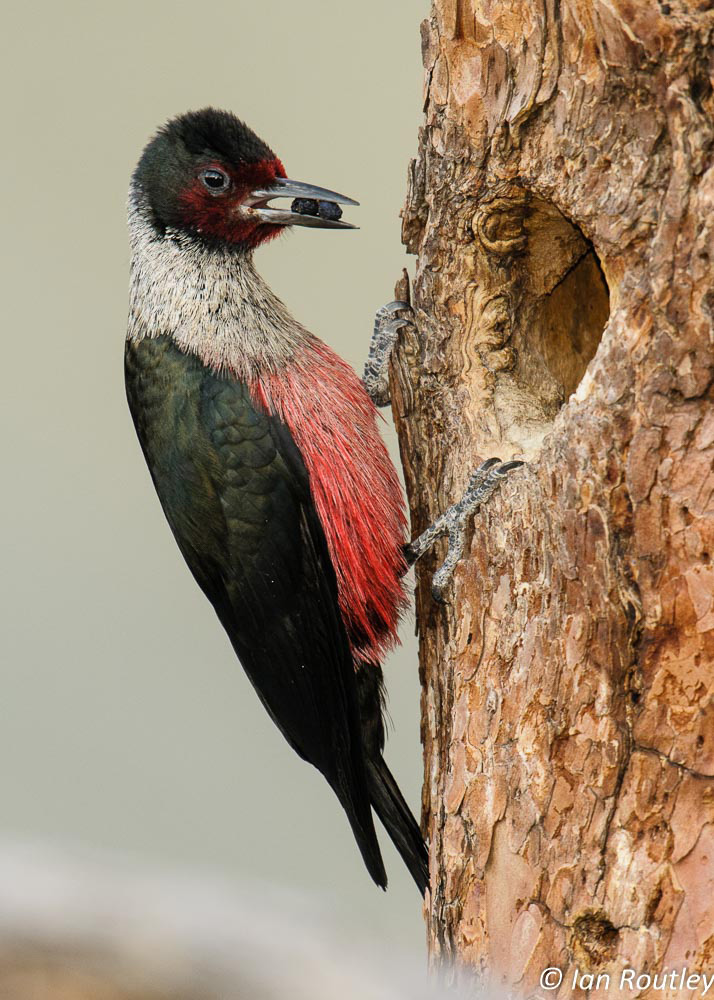 9) Golden Eagle. March 6, 2014. Taken on the road leading to our house.  Golden Eagles are relatively common in our area.  I know of several nesting sites and often see them when we are hiking.  My hiking partner and colleague brings along his Jack Russell when we are out in the backcountry.  We love to tease him that the eagles are eyeing his dog, wondering what kind of white Marmot is that? My wife Vivian and I had just returned from a month long backpacking trip exploring the more remote areas of the Yucatan Peninsula to a gloomy Lillooet. We were returning from a walk with our dog when we realized this amazing bird was in our ditch feasting on a deer carcass.   I did not have my camera as at the time I foolishly thought nothing in Lillooet could match where I had just been.  I rushed home and using my car as a blind, managed a few photos before the bird became skittish.  I debated using the alternate version of the eagle flying (and looking) directly at me before it swooped up in to this tree, but this one captures it’s powerful tarsi, talons, and intense gaze. I left it to feed after taking a few photos. 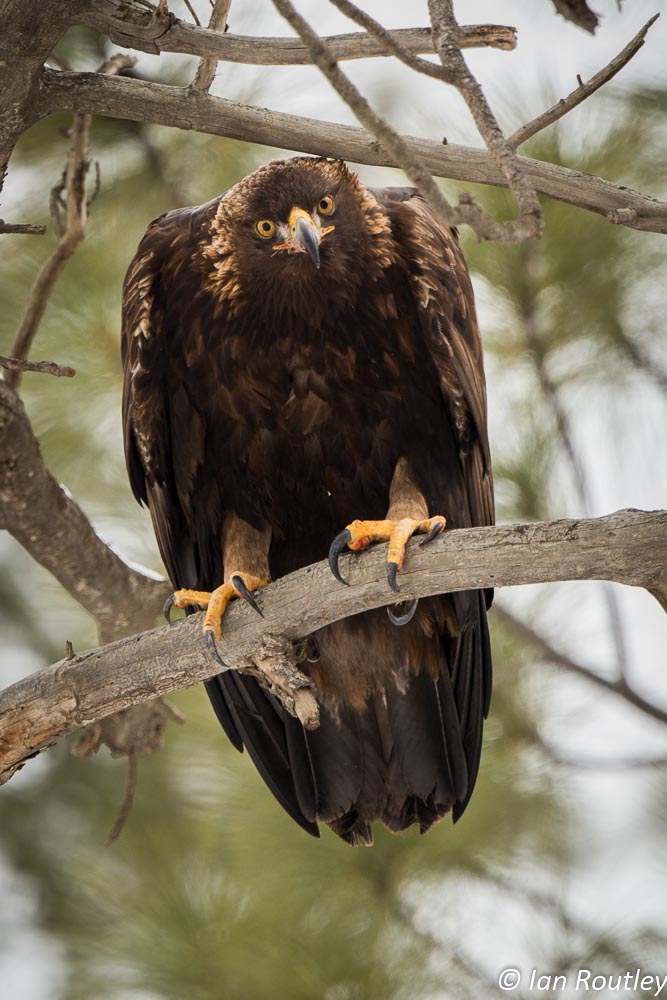 10) Baird’s Sandpiper.  September 7, 2015.  Hat Creek valley.  One of the disadvantages of living in Lillooet is a scarcity of shorebird photo opportunities.  We have lost access to one of our best places for shorebirds and during migration the few areas that are left are very hit and miss.  The Hat Creek valley, although a bit of a drive, is still a good place to visit for this opportunity.  In the fall the surrounding Aspen and Red Osier dogwood can impart some lovely colours to the water.

11) Barn Owl.  August 18, 2013.  Abandoned mill site near Lillooet.  A record of one of the more difficult owls to find in our area.  Most reported sightings turn out to be very pale Short-eared Owls.  However I have had numerous confirmed sightings, including an unsuccessful attempt to breed.

12) Osprey attacking a Bald Eagle.  August 10, 2015.    We now have a number of Osprey nests at the exits to the various valleys that feed in to the Fraser River.  During breeding season the Osprey are very aggressive to any large birds that get close to their nests.  The day before, while walking the Lower Spawning channels near Lillooet, I witnessed this behaviour between these two raptors.  I missed this shot as I didn’t have my camera set for rapid frame advance.  I returned that day, not expecting to witness the same behaviour.  I did, but unfortunately this day the birds were about a kilometre away versus the day before when they had been just above me.  I still like the photo though.  A challenge for next year. 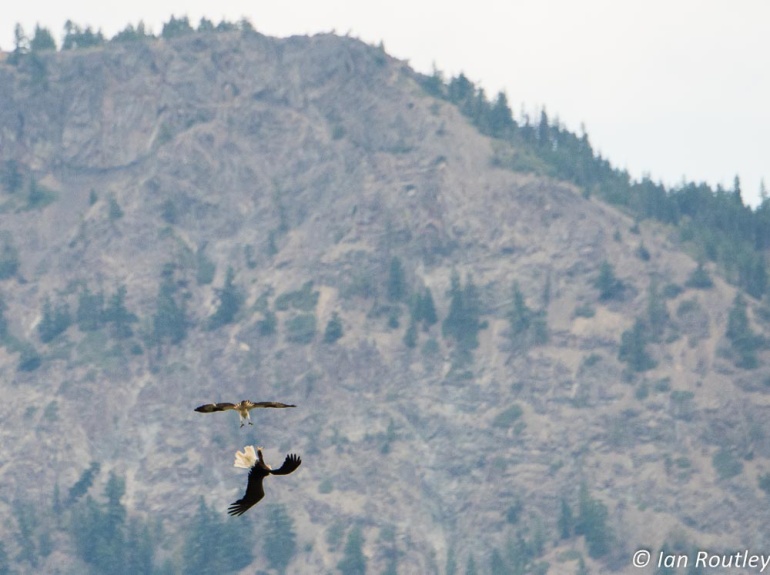