This bird was found during a whale watching trip in Telegraph Cove, and subsequently was well photographed under good conditions and seen by multiple observers lucky enough to be on that boat. The body shape and structure and long, pointed bill immediately identify the bird as a sulid (boobies/gannets). The bluish-grey bill, whitish neck and brown-streaked crown, nape and face, uniforn dark brown wings, light barring on back, white base to tail and pale yellowish eye all support the identification as Blue-footed Booby. Together these features in concert eliminate all other sulids. The closest species in appearance is Peruvian Booby, but that species can be eliminated due to its white speckling on the wings, more extensive brown mottling over head and underparts (immature) or all white head (adult), and black face. This sighting is likely part of a large and well-documented influx of Blue-footed Boobies to coastal California, with at least 23 distinct reports during September (2013) in that state.

One of the oddest provincial firsts found during the late 2000s. While predicted to eventually be found in the province, nobody expected that record to come from the doorstep of a house in Lillooet! The photos of the captive bird in the hand show it very well, and the specimen is on deposit at the Cowan Vertebrate Museum, UBC (ID # is UBCBBM CTC B016000). The concolorous light gray head and back and other features such as wing pattern and colour identify this bird as a Pterodroma petrel of the “cookilaria” group. This petrels in this group are very difficult to distinguish from one another. All are basically white below and grey on top with M pattern on the dorsal side of wings. The closest species in appearance is Pycroft’s Petrel (P. pycrofti), but this can be eliminated due to a combination of plumage details on the head/neck, and measurements (the latter of which are not typically available for seabird sightings!).

The one excellent photograph clearly shows a Gray Wagtail by its combination of yellow rump/uppertail coverts, undertail coverts, flanks, and chest, whitish throat, narrow supercilium, contrasting grey back, broadly white-edged tertials, narrow wing-bars, and short-legged and long-tailed appearance. The report describes the bird flying up into a tree, which is typical for (but not unique to) this species. Aging of this species in the field (or from photographs) is notoriously challenging, though the bird is likely immature. 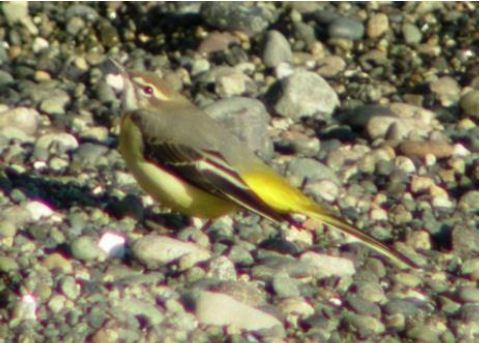 The video of this apparent first year male Pine Warbler is adequate for a positive identification. The uniform brownish-olive upperparts with no streaking, yellow breast contrasting with whitish undertail coverts, greyish-brown auriculars with yellowish patch on side of neck, yellowish eye-crescents, heavy bill, darkish legs and feet, two wing-bars, and white undertail coverts all support the identification, while eliminating similar species such as Blackpoll, Bay-breasted, and Prairie Warblers.

Multiple distant photographs were submitted for this record. Of these, one in particular conclusively shows a Fieldfare. The grey head, rufous back contrasting with light grey nape, rusty breast sharply delineated from the white belly, blackish tail contrasting with pale rump, white undertail coverts, and white bend in wing are all consistent with the identification. The only fieldmark that does not show in the photograph is the typical dark spotting along the flanks; however, this fieldmark can be quite variable from bird to bird. The combination of the above fieldmarks eliminates other Eurasian thrushes (e.g., Redwing, Dusky Thrush). 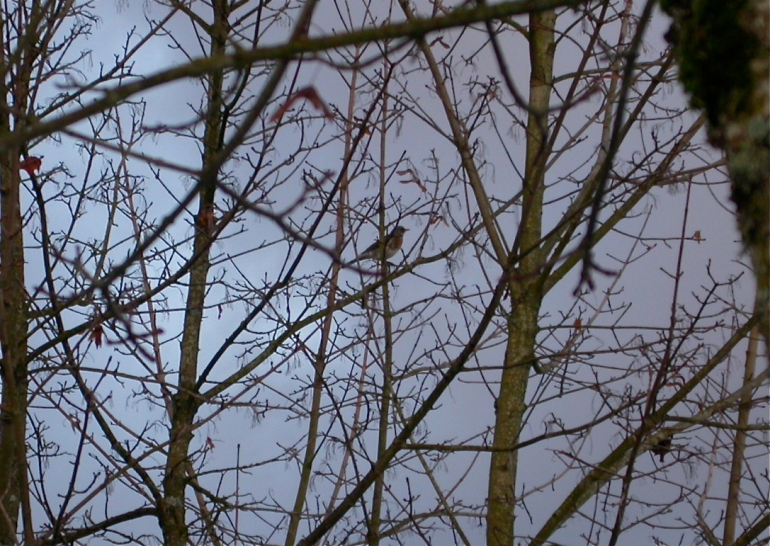 This record was unfortunately not known to BC birders until well after the sighting. However, the good photographs show enough diagnostic fieldmarks to conclusively identify this species. The prominent white supercilium, distinct whitish malar stripe wrapping around brownish ear-coverts, pale-yellowish lower mandible, dark streaks on the chest and flanks, white belly, and reddish patch near the bend of wing and marginally on flanks confirm the ID. As is typical for the age of Eurasian vagrants occurring in BC, the bird appears to be a first-year bird based on the whitish tips to the greater coverts. This record fits nicely into a growing trend of records from the west coast of North America, with other records from Washington State (21 December 2004 to 14 March 2005) and Alaska (15-26 November 2011).