Birding and nature study have been life-long interests for me.  The advent of high-resolution digital cameras added a new dimension to my enjoyment of nature, as it has for many – the ability to capture special moments and experiences with wildlife.

Since retiring from the professional study of biology at the molecular level, I have devoted most of my time to birding and general wildlife observation.  In this, photography plays a central role and I now rarely go birding without my camera equipment.  The images shown here were captured with a Canon EF 100-400 mm f/4.5-5.6 IS lens and various camera bodies over the last few years, the current one being a Canon 7D. With a maximum focal length of 400 mm, such a lens lacks the “reach” of the larger lenses used for bird photography.  However, this equipment combination has the advantage of relatively  light weight, so that I don’t hesitate to carry it on long hikes, and it is always ready at hand for those occasions when cooperative avian subjects present themselves.

I hope you enjoy these images from favorite birding spots around Vancouver and other parts of British Columbia.  More images can be found on the following web sites, which also include subjects from international birding excursions:

Don’t forget to single click on Peter’s images to see them full size.

While doing a raptor survey at Beach Grove, Tsawwassen, I came upon this Great Blue Heron fishing close to the dike.  To my surprise it pulled an enormous sculpin from the water.  Luckily, the light was just right to capture the moment. 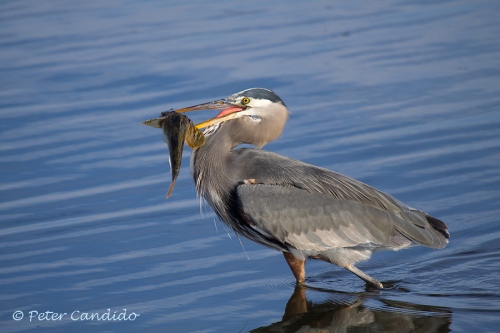 In 2005 Purple Martins first nested in old boxes on the Fraser River shore at Iona Island, Richmond.  Since then the colony has grown and thrived, with about 25 pairs nesting the last few years.  Occasionally, birds perch on shrubs above the shoreline, allowing chances to photograph them in a natural setting.  I encountered this adult male along the trail bordering the nearby pond. 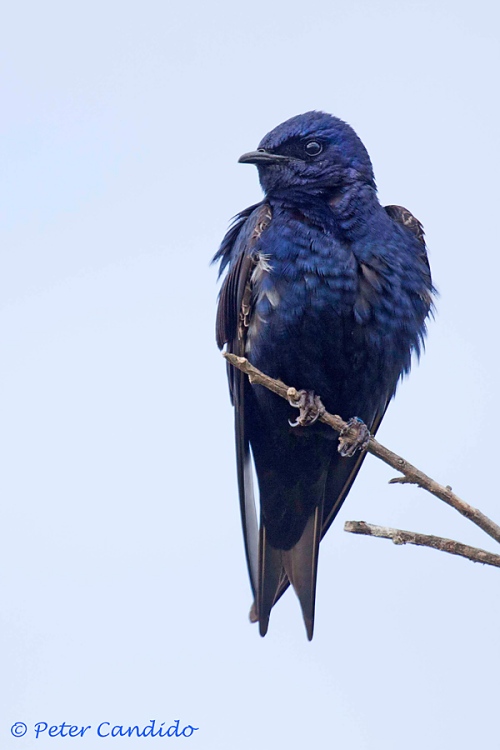 Long-eared Owls wintering in the Boundary Bay area are usually well hidden in dense shrubs.  This one was surprisingly exposed across the ditch bordering the dike, and seemed unbothered by the bikers and dog walkers.  This image was made from a respectful distance, and without drawing attention to the bird. 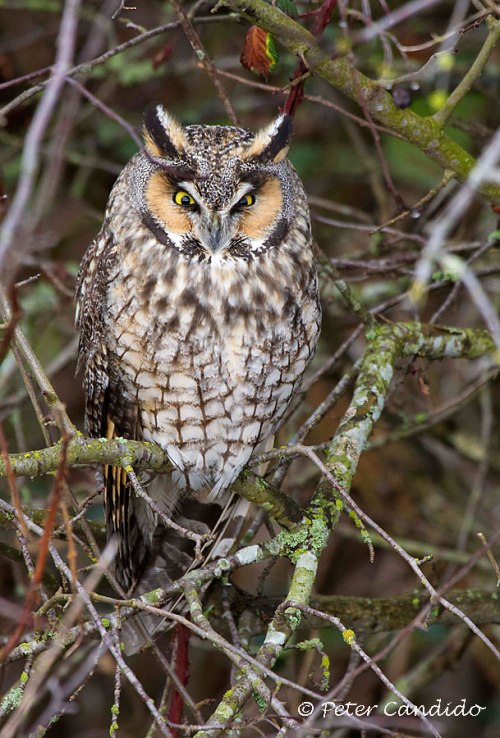 It’s always a pleasure to see any species of ptarmigan.  In early June 2011 while doing surveys for the BC Breeding Bird Atlas our team came upon three Rock Ptarmigan on a mountain road north of Stewart.  This male in non-breeding plumage cooperated long enough to be photographed, a study in white-on-white with the evergreen and bright red eye comb providing the only colour. 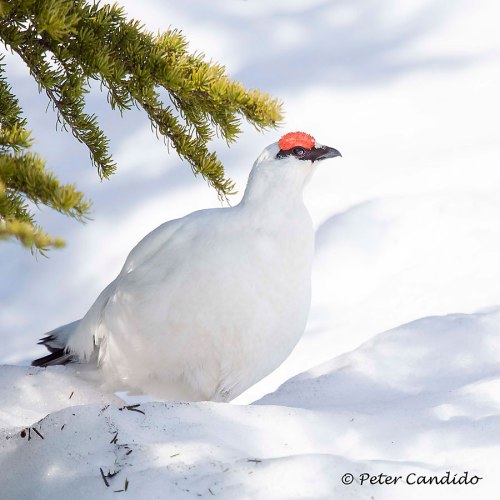 A late November, 2010 walk on the north jetty at Iona Island, Richmond, led to an opportunity to photograph Sanderlings up close, feeding at the water’s edge.  Perhaps the birds’ attention was more focussed than usual, as the temperature was -10 C with patches of snow on the ground – a condition certainly not evident in the image. 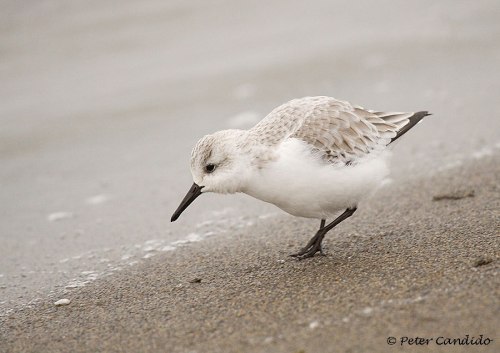 In the early afternoon on a sunny day in January, I did not expect Short-eared Owls to be active.  Nevertheless, two birds were hunting in the same field with a Northern Harrier at Boundary Bay.  For the most part, the two species gave each other plenty of space. Occasionally, however, exciting interactions were seen, and I was lucky enough to capture one of these brief moments. 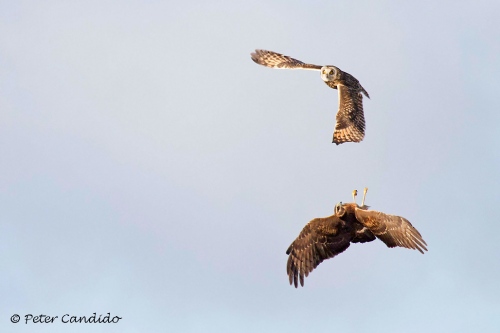 This lovely male Chestnut-sided Warbler turned up in Camosun Bog on the west side of Vancouver in late June, 2011.  It sang energetically for days, not realizing that the nearest potential mate was likely hundreds of kilometers away. 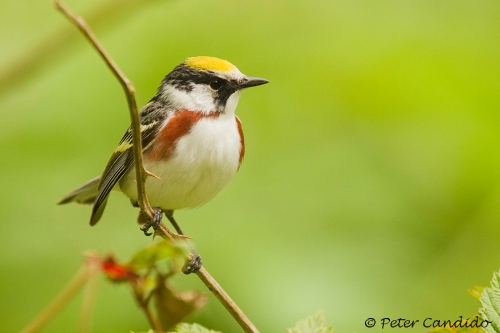 Returning from a walk on the north jetty at Iona Island, Richmond, I encountered this Bald Eagle standing on the beach.  It refused to move as I approached, so I took the opportunity to make some closeup images of its piercing stare.  Though I was initially concerned that it might have been ill, it later flew off.  Perhaps it was simply digesting a large meal that made it difficult or uncomfortable to fly. 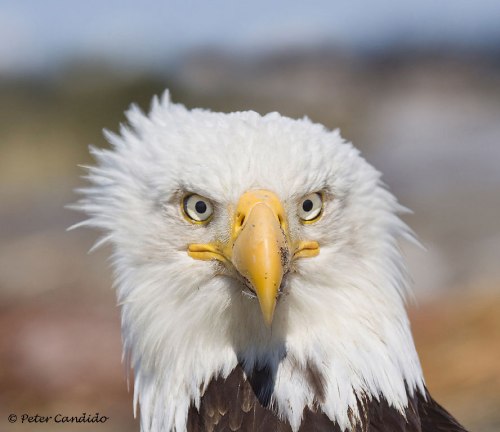 The ubiquitous Red-winged Blackbird makes an impressive subject when a male is singing and displaying his shoulder patches, but getting an uncluttered background can be a challenge. This image was made in early April, 2010 at Iona Island, Richmond. 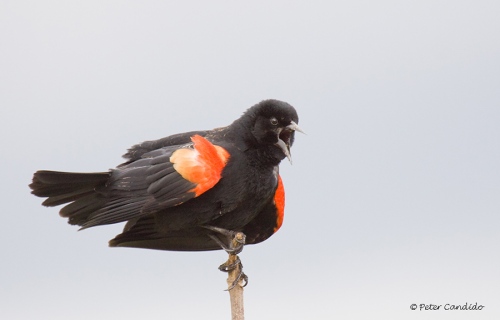 The George C. Reifel Migratory Bird Sanctuary is the best location around Vancouver to photograph Sandhill Cranes up close.  A resident pair of cranes often attracts migrant groups in the fall.  This bird is calling to other cranes in flight overhead. 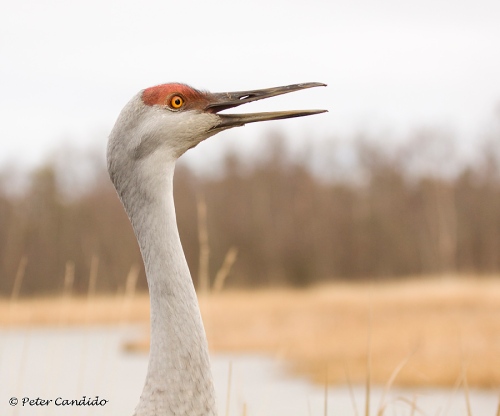 One has relatively few opportunities to photograph pelagic species in British Columbia, and often the birds are distant and lighting conditions difficult.  This Black-footed Albatross was photographed offshore on a pelagic trip out of Ucluelet on April 29, 2012. 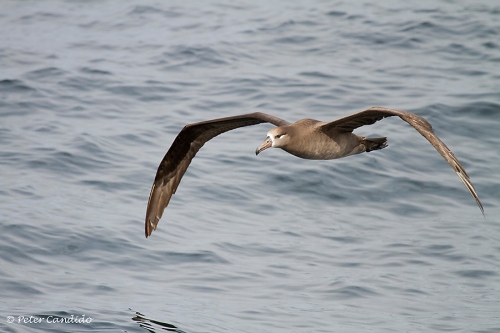 While counting birds for the 2011 Vancouver Christmas Bird Count, my group encountered this Snowy Owl perched on the side of the Iona south jetty.  We were driving to the tip of the jetty to count waterbirds, and this image was made through the open window of my vehicle. 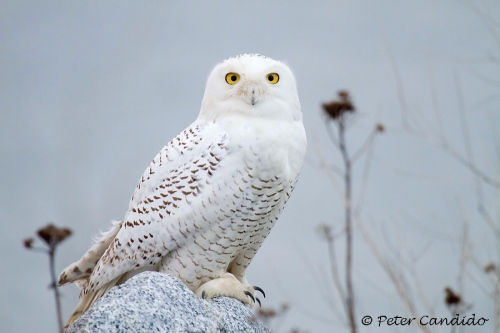 .
Editor’s Note: Because of yours truly’s lack of mastery of our website, you were not able to easily leave comments about Peter’s photographs when they were originally published. Please feel free to do so now. For that matter, feel free to do so on any of our three featured photographers’ pages. Thanks.