Photography has always been an important aspect of my career as a field ornithologist and my birding hobby. I was raised in South Africa and birding becomes a natural activity when one is surrounded by such diverse and interesting avifauna. While studying biology at the University of Cape Town I started hanging around the Percy FitzPatrick Institute of African Ornithology and pretty soon I was doing summer jobs for the “Fitz”. Upon graduation I was offered a job as a field assistant on Marion Island in the sub-Antarctic where I spent a formative year totally immersed in the lives of penguins, albatrosses, petrels, fur seals and other amazing animals. This was my equivalent to Darwin going on the Beagle, although in my case the outcome for the world of science has obviously not been as overwhelming. Before leaving for Marion Island I bought my first serious SLR – a Minolta SRT 101 with a 200 mm Rokkor lens. Rugged and dependable.

I returned to Marion Island to do graduate work on Black-faced Sheathbills (Chionis minor), a bird with fascinating foraging and social behaviour and a strong dependence on penguins, but a family so obscure that almost 40 years later I am still regarded as an expert on the Chionidae. Check them out on my website: http://web.uvic.ca/~mamu/

Photography continued to be an essential part of my work as I started a career in academia and field research in Canada, via UBC, Memorial University in Newfoundland, Bamfield Marine Station and UVic. I’ve been fortunate to have worked on many species of seabirds in some amazing places – guano islands of South Africa, Newfoundland, Seychelles, Alaska and, of course, British Columbia. For three years in the 1990s we did monthly vessel transects off SW Vancouver Island where Black-footed Albatrosses, Sabine’s Gulls, South Polar Skuas, and many other delectable pelagics were regulars on my year lists. For most of the past 30 years I’ve focused research on Marbled Murrelets, working with my students both at sea (mostly off Vancouver Island) and in the murrelet’s old-growth forest nesting habitat. Sadly I do not have any images of Marbled Murrelets from B.C. worth sharing.

In 2007 my wife Andrea and I moved to the rural Kane Valley 30 km south of Merritt, surrounded by a mix of grasslands and forest with many lakes and wetlands. Most of the photos here come from this area. I generally try to take my camera along on outings and most of my best photos are entirely unplanned, when I encounter something interesting. I currently use a Canon 7D Mk II with a 300 mm 2.8 L lens. I find that a fixed focal-length tele lens gives me much sharper images than any zoom I’ve tried. Some of my earlier photos were with a Canon 20D or 50D. I seldom use a tripod and I find a 300 mm lens is great for carrying around and hand-held shots, especially if I am in a boat or on some other unstable platform.

Looking at the photos I’ve selected here I realize that several images feature the bird’s surroundings almost as strongly as the bird itself – thorny bush, pond weeds, ice, etc.. While I greatly admire portrait shots, I find that images telling a bit of a story about the bird have more long-term interest. I’m a big admirer of the art of Robert Bateman and in many of his most evocative wildlife images it is the habitat as much as the animal that engages one’s interest.

The melodies of this bird are one of the most anticipated signs of spring in the southern B.C. interior. I always underestimate the distance from which meadowlarks are calling – what sounds like a bird 20 m away turns out to be 200 m away. This photo was taken just outside Merritt in late March 2016 with patches of snow still covering much of the ground. The ratty old barbed-wire fence is a common feature of meadowlark habitat in our area. 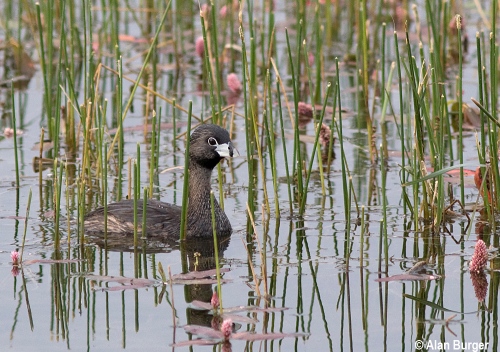 This little grebe is found in many of the lakes and ponds in the Kane and Nicola valleys near my house, but is never common. Often I hear only their loud “kow-kow-kow” calls emerging from some thick aquatic vegetation. This pic was taken from my car parked on the edge of Harrison Lake in Kane Valley on 11 July 2015. The grebe, accompanied by three half-grown chicks, was feeding in the shallows near the edge of the lake. They were evidently reluctant to move away even with my car nearby.

In most years there are a few pairs of these sapsuckers nesting within a few km of my house and it is one of the more exotic species on my bicycle-driven NMT list. Sadly two of the sites seem to have been usurped by the more common Red-naped Sapsuckers, so it looks like I’ll be pedaling further in future years. This photo was, however, decidedly not an NMT record – it was taken near Hembry Mountain Road near Princeton on 25 May 2014 when a couple of us were looking for nesting owls. The male sapsucker was nicely positioned in good light to show off all it’s diagnostic features, even the little red patch under the chin.

Back in the late 1980s I worked with Rory Wilson, one of the pioneers of wildlife bio-technology. We attached miniature recording devices to diving seabirds to measure the time spent foraging at different depths. Working on Triangle Island and other B.C. colonies, we established the first underwater foraging profiles for Rhinoceros Auklets – using their wings to ‘fly’ underwater they can reach depths of 60 metres, but generally forage in the upper 10 m of the sea. Impressive depths for a small bird. You can see our published paper here: http://web.uvic.ca/~mamu/seabirds-vi.html

This rhino, in breeding plumage, was photographed many years later during seabird surveys off the West Coast Trail, Vancouver Island. The bird popped up near our boat and luckily I had a camera in hand.

Few birds begin their courtship in the fall, but many waterfowl do. Pair bonds get established during the fall and winter which is why male ducks have just a short ‘eclipse’ basic plumage before moulting back into their breeding alternate plumage in late summer. In October 2015 I was in Port McNeil working on a Marbled Murrelet project and in the bay near our lodging was a group of Hooded Mergansers. As the photo shows, the males were primed for courtship, with crests erected and non-stop posturing. As the photo also shows, the lone female seemed singularly unimpressed and was focused on preening herself. But with such handsome suitors I’m sure one of them would have won her over before too long.

One of the good things about the recent BC Breeding Bird Atlas project is that it encouraged birders to look closely at what the bird was doing, to record evidence of breeding instead of just ticking off the species. This photo was taken during an atlassing outing along Coalmont Road near Aspen Grove in June 2011. Unbeknownst to me, the tree where I was watching a pair of nesting Tree Swallows was also the nest site of a pair of Mountain Bluebirds. So when this female arrived, bearing a large caterpillar for one lucky chick, I was close enough to get a decent photo.

I enjoy doing Christmas Bird Counts and in the Merritt count it is always a delight when one of these winter visitors from the boreal regions pops out of a thicket. This photo was taken in January 2015 near Nicola Lake.

Driving through the high elevation Douglas Lake grasslands in summer one sees nondescript little birds running along the road edge. It is only when they flit up to a higher perch that one sees the strong markings of their face and breast, and with a bit of luck, the little tufts on either side of the head that give Horned Larks their name. I got this image on the Douglas Lake plateau on 4 July 2012. Looking closely at this photo one can see why birds need to moult each year to replace their plumage – this bird’s feathers are quite worn and faded after almost a year of use. 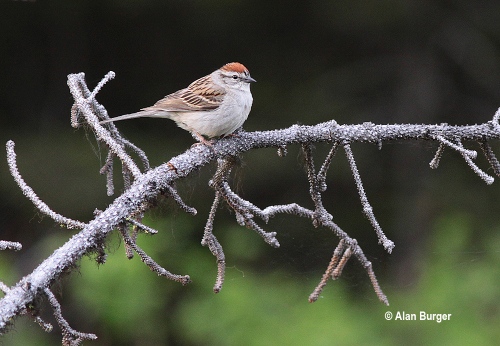 This photo was taken on our property in Kane Valley in June 2011– one of those occasions when a bird lands on a nearby branch and you aim and shoot in the second or two before the bird disappears. No time to adjust anything on the camera. As nature photographers know, 99.9% of such shots end up in digital oblivion. But in this lucky instance the light, background and foreground all collaborate to make an interesting image of a common, often overlooked species. 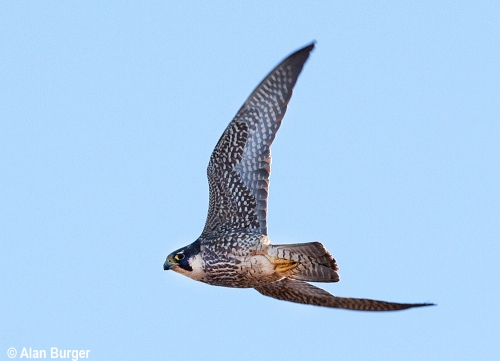 Few experiences can match seeing the power and speed of a stooping Peregrine. In other photos I have of this species they are either perched or lazily circling about. In this case I was actually stalking some Green-winged Teal in a small pond near my home in Kane Valley with camera at the ready and set for high-speed repeated shots. I wasn’t the only one intent on the teal. Suddenly there was a whoosh of wings overhead, the teal took off and I fired off shots at the passing falcon. Luckily one of them was in reasonable focus. Taken 13 April 2014.

Every year I try to make a few trips to the alpine areas of the Coast Mountains near my home. In September 2014 I climbed Needle Peak, the impressive-looking mountain overlooking the Coquihalla Highway summit. Although I was on the lookout for ptarmigan I almost stepped on one before I saw it. And then another. And another. A female with two grown chicks. No tele lens needed for this shot – I used a 24-105 mm lens.

It was a cold day in late December 2015 when I went up to the Douglas Lake plateau. That’s a good time to find Snow Buntings and Common Redpolls and perhaps Grey-crowned Rosy-finches. Douglas Lake was frozen over but next to the bridge at the Spahomin Indian Reserve, where Nicola River leaves Nicola Lake, there was open water. This heron was using the edge of the ice as a hunting platform – a cold day for ice-fishing. I was intrigued by the pattern of the ice edge leading up to the bird.