Pictures and text by Alistair Fraser

There are five dipper species in the world, but this note treats only the local one: the American Dipper (Cinclus mexicanus). Indeed, all these observations of dippers were made around Kokanee Creek, a stream that flows into Kootenay Lake (elevation, 532m).

Dippers are unusual songbirds in that they prefer to forage for fish eggs and aquatic insects on the bed of fast-flowing mountain streams where they have few competitors for resources.

A dipper will often stand on the shore or in the shallows and peer below the surface for prey.

It will then dive and fly underwater scanning below much as other birds do in the air.

It will surface again, possibly with a fish egg,

a larva (this dipper is shaking the casing from a caddisfly larva), 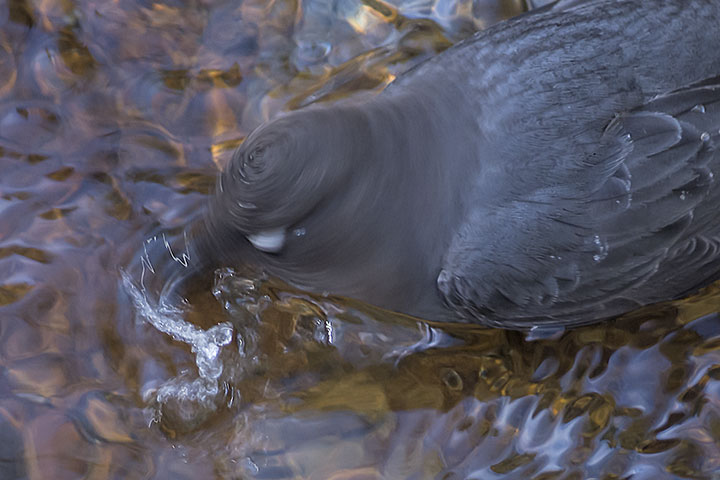 or an aquatic insect. Such things are quickly consumed.

Surface ice on the creek

The dipper’s primary dependence on food from the creek bed would suggest it might have trouble with ice when the temperature drops. Indeed, dipper survival does plummet with the temperature. However, there are complexities to the formation of ice that affect dippers.

In a reasonably calm creek, the water becomes stratified: denser water on the bottom, less dense water on the top. A curious aspect of water is that it is less dense at 0C than at 4C, so the colder water rises to the top while the warmer water sinks. As a result, in calm waters ice forms at the surface. Surface ice covering calm waters can readily be penetrated by an otter, but not by a dipper. This is not a good thing for a bird that prefers to feed on the creek bottom.

However, surface ice has difficulty in bridging a turbulent creek. The issue is that turbulence mixes the water and so prevents the stratification which puts the coldest water at the surface. Surface ice can still form along the more tranquil edges of the creek and is now referred to as border ice. So, a dipper can continue to forage in the central turbulent portion of the creek. It is plausible that this might influence a dipper’s preference for such fast-flowing creeks: as the temperature drops, surface ice does not readily prevent access to the creek bottom as it would in a gently flowing creek. In cold weather, turbulence keeps a portion of the creek bottom open to dippers for a longer time. 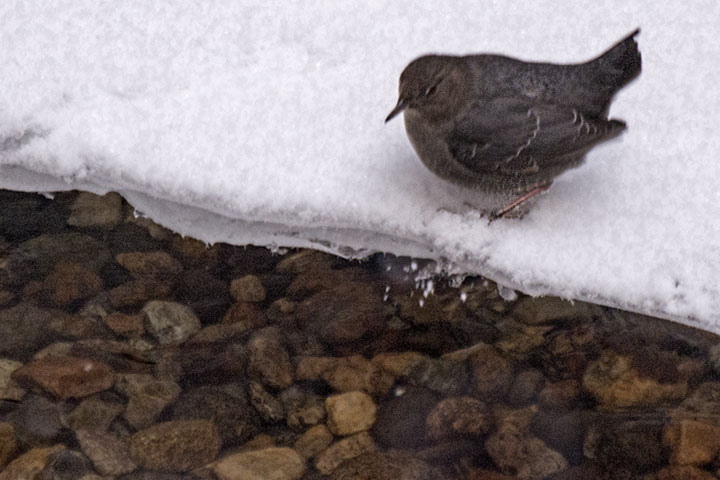 But, if the cold is such that surface ice covers even a turbulent creek, what is the dipper to do? On a coastal stream, a dipper would descend to open water at a lower elevation. Here, the lowest water is that of Kootenay Lake (532m), which gets border ice, but stays open. Indeed, the primary time that dippers are seen out along the lakeshore is during the dead of winter. 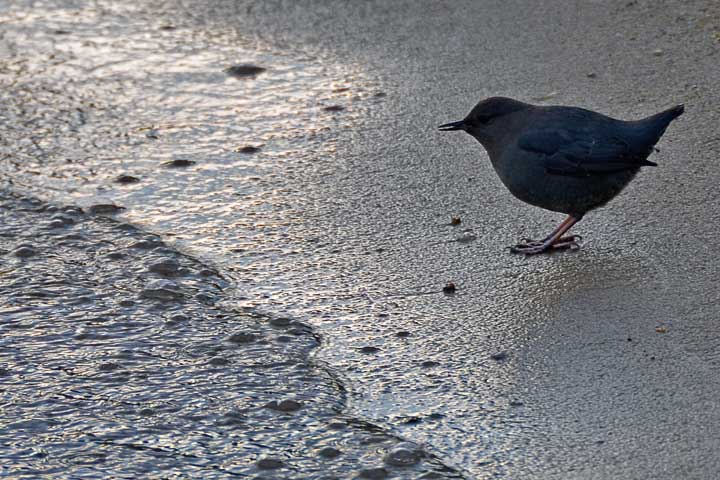 It is plausible that one reason local dippers favour a fast-flowing creek is that turbulence prevents the water stratification that produces the surface ice that, in turn, blocks access. Yet, dippers still have to deal with the scourge of anchor ice. The turbulence that inhibits surface ice is precisely that which favours the formation of anchor ice.

Turbulence does not prevent water from getting colder; mixing merely ensures that the temperature drops uniformly throughout the water column (not solely in a thin upper layer). Ultimately, the temperature in the turbulent stream can decrease to 0C and ice does form, both as crystals on the creek bottom and as frazil throughout the water depth. Frazil, shown here in waves along the lakeshore, is composed of individual particles of ice prevented from sintering (bonding) by the turbulence. 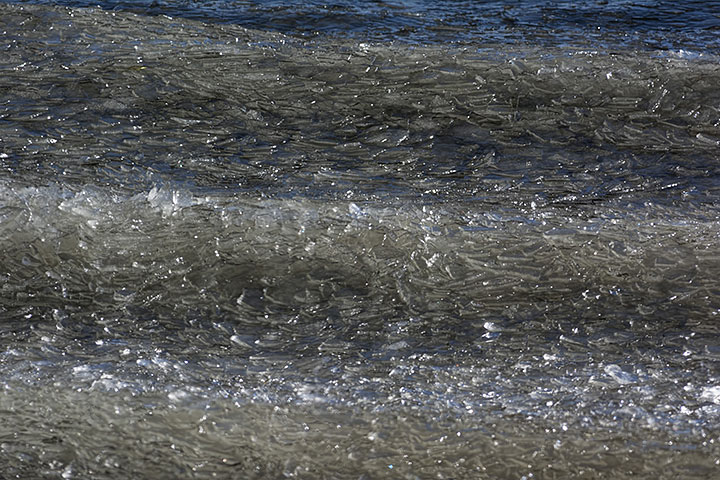 Frazil forms throughout the water column and some of it brushes against rocks and sediments on the creek bottom where it sticks. Then more frazil sticks to that and ice builds up on the floor of the creek. This is anchor ice, also known as bottom-fast ice. So, the very turbulence that prevents the formation of surface ice can, with sufficient cold, engender anchor ice. Clearly, anchor ice can also block a dipper’s access to the creek bottom. In this view, whitish border ice covers the tranquil sides of a creek while greenish anchor ice covers the bottom of the turbulent central portion.

Of course, anchor ice still leaves much of the depth of the water open for hunting and this still allows dippers to hunt for small fish. In my limited experience, they seem to go after fish more often in the winter than the summer. This December picture shows a dipper that has captured the fry of a rainbow trout. Even though the dipper had considerable difficulty in swallowing this fry, it had been skilful in capturing it, having first clipped its caudal fin to prevent escape.

Goldilocks to the rescue

This section records observations made over two days in early February, 2014, when the air temperature ranged between -10C and -15C.

In the tranquil waters of the creek mouth, surface ice bridged the creek. Dippers had hunted here during mild weather, but were now absent. The dark marks on the snow covering the ice are from boots and skates. 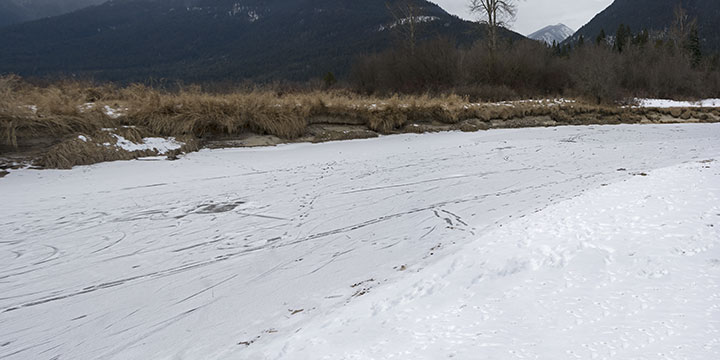 Now comes the surprise. Between these two regions was a third, call it a Goldilocks zone: one that was not so turbulent that anchor ice formed, and not so smooth that surface ice bridged across. This is one of three dippers seen at this region where the turbulence and ice were just right.

The existence of a dipper’s Goldilocks zone was unexpected. The anecdotal nature of the observation prompts questions:

• Would even the Goldilocks zone vanish with another 10C drop in temperature? Probably, but it does extend the freezing conditions a dipper can tolerate.

• My observations were made on Kokanee Creek. Is it likely that all local creeks will have such a Goldilocks zone? No, I think it is unlikely that this is a universal feature.

• Might the existence of a Goldilocks zone influence a dipper’s choice of creeks? Probably, in that it makes the creek habitable under a wider range of conditions.

• Am I likely to be able to settle these conjectures? No.

Habitability of a dipper’s creek

It is possible that a dipper’s preference for hunting in creeks results from the scant competition it faces for resources there.

However, it is likely that the local dipper’s preference for fast-flowing creeks is at least in part the result of the turbulence that forestalls the formation of the surface ice that would have blocked access in gentler flows. Certainly, in the southern portions of the dipper’s range, creeks might not freeze, but the bird’s preference for turbulent streams could have developed where ice was bothersome.

In northern climes, all turbulent creeks are unlikely to be equal, and a dipper probably picks ones with a Goldilocks zone: a region where it is not so turbulent that anchor ice forms, and not so smooth that surface ice bridges across. The existence of such a zone would greatly increase the winter habitability of a creek for a dipper.

Then maybe it is just all the work of robodipper as it keeps creeks safe for dippers everywhere.

One response to “Dippers and Ice”