The BCFO Young Birder Program welcomes talented young birders into the BC birding community, and provides them with opportunity, encouragement, and mentoring.

• exceptional observational and birding skills well beyond the ‘novice’ level;
• shown substantive engagement in the activities of the birding community through their accomplishments, participation, and contributions;
• been nominated and sponsored by a BCFO member and approved by the Executive Committee.

The Awards Program, now in its fifth year and totalling 27 awardees, continues to grow as we find many young, keen, committed birders from around BC. Each recipient receives a free membership to BCFO until age 18, a memorial plaque, and a stylish BCFO ball cap.

Here are the BCFO Young Birder Award recipients for 2018, presented in alphabetical order: 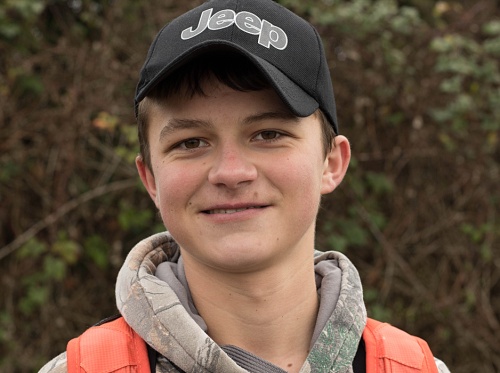 Daniel first distinguished himself when he managed to see all three species of Ptarmigan: Rock, Willow, and White-tailed during a family vacation in Northern BC. Daniel has gone birding in several locations, including China, where he got fifty lifers in one day with his Uncle Tom. His favourite places to bird are Tuyttens Road and Cheam Wetlands Regional Park in Agassiz. He has volunteered at the Fraser Valley Bald Eagle Festival in Harrison Mills, and at Cheam Wetlands where he has helped clean the park after an ice storm, and helped in building the south entrance to the park. Every year he participates in the Chilliwack and the Abbotsford Christmas Bird Counts. His uncles Jim and Dave Beeke mentor him and help him with bird identification questions. He has been birding for six years and participates in the Fraser Valley Birding forum and enjoys posting photos to his Flickr acct. He uses eBird every time he birds, and is passionate about citizen science. His favourite type of birding is to scan a large flock of birds to find which species is different. He loves that challenge. His entire family are birders and have helped to inspire him to be the birder he is today. 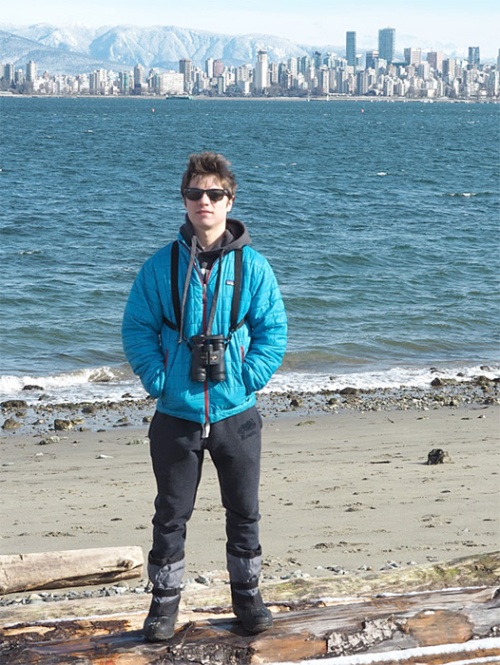 Zac has long been an enthusiast birder and been eager to learn about the natural world. Zac has developed and advanced his understanding of wildlife in his travel adventures, and his more local recreational pursuits. Zac is a promising and already talented young naturalist and birder, and he’s following a fulfilling path that will benefit himself and ensure the conservation of nature in general. This award will encourage him to continue on this path.

Zac says about himself:
I recently gave a lecture to a grade seven class to introduce them to birding, and I organized a one hour activity about birds with them. I am also returning to Costa Rica this summer for six weeks to do some research, hopefully on birds. As an active member of the global birding community, I have also been birding around the world (Costa Rica, Portugal, France, Spain, Israel, Hungary, Czech Republic, Slovakia, Austria, Canada, the U.S., etc.), and have participated in birding tours in most of these places. As well, I have participated in Christmas Bird Counts, and in eBird’s Global Big Day. I have emailed sightings to Melissa Hafting for BC Rare Bird Alert. I have introduced birding to my family (close and extended), and to friends. All these things advance the birding community as I contribute to the global knowledge of birds and help spread this knowledge to others. By making connections and participating in birding around the world, I am also bringing the birding community closer together.

Cedar first demonstrated her enthusiasm and knowledge of birds on the September 2017 Ucluelet Pelagic trip when she was quick enough to spot the Manx Shearwater that hardly any adults were able to get on. She is a very intelligent, sharp birder with an engaging and humorous personality. Very good at species identification, she loves to bird with her best friend Toby Theriault (2017 Young Birder Award winner). However, she is also a fantastic solo birder, having found a Tropical Kingbird this year in her hometown of Tofino, and has a BC list that many adults could only dream of. She has done several pelagic trips with her friend Adrian Dorst and has seen many Black-footed and Laysan Albatrosses. Living in Tofino, a great migrant trap, she has spotted many of the rarities that frequently show up there. Cedar also loves to bird with her friend and mentor Ian Cruickshank, who has taught her a lot about birds. Cedar went on a trip to Manning Provincial Park with the Delta Naturalists in August 2017. President Tom Bearss commented that she was so good she became the leader for the group of 10 adult birders on the tour. She spotted all the birds and plants, and explained them well to everyone. Truly impressive at 13 years old. She is another young birder in the province who will make us proud for many years to come.

Kalin is a generous and helpful young birder. The nominator first met him while twitching a Little Gull in Penticton. As soon as she got to the lake to open up her scope, Kalin came running to show her where the bird was. He had also found an American Dipper there as well. As they looked at the Little Gull together, the knowledge he showed about the species and about all the birds present on Okanagan Lake was impressive. He knew the migration routes and nesting behaviours and other fun facts about the Little Gull. He loves to bird the ABA area and recently went to Baffin Island and Florida. He is an amazing photographer and his website is here: https://www.instagram.com/BIRDZ.OKANAGAN/ Kalin birds almost daily near his home in Kelowna and he is very passionate about bird conservation. Under every photo he posts to Instagram, he educates the reader about the bird’s plight and issues the species is facing. He also provides little known informative facts. He definitely is a future conservation leader and nature steward for the Okanagan and Province of BC.

Jason, whose favourite type of birding is owling, has a vast knowledge of birds. His volunteer work includes the Chilliwack Christmas Bird Count in which he has participated for 5 years. He has also volunteered with the Eagle Festival in Harrison Mills. Jason uses eBird every time he goes birding, and is passionate about citizen science. He loves to bird with his cousin Daniel (also nominated in 2018). His uncle, Dave Beeke, is his birding mentor, and has taught him a lot about birds and identification. His whole family loves to bird and is very supportive of his hobby. Jason will be a valuable contributor in the future to BC’s birding community.

Marnix loves to count birds and particularly loves to come on hiking field trips in the mountains. He volunteers to do trail clearing with the Langley Field Naturalists. A polite, helpful and respectful birder, Marnix knows a lot not only about birds and their identification but he is also proficient in the identification and habits of amphibians and mammals, usually the first one to spot a Pika or Hoary Marmot on hikes to spot ptarmigan. Marnix enjoys working on the farm at home where he raises calves, sheep and rabbits. He has found many uncommon birds on his property such as Townsend’s Solitaires, House Wrens and White-winged Crossbills. As a well rounded nature enthusiast, Marnix will no doubt continue to add to the understanding of BC’s wildlife and birdlife.