The latest issue of BC Birding is available for reading or downloading in the Members’ Area. Our first issue of 2014 is a bumper edition of 48 pages, filled with news, and information and articles about birds and birding from the latest scientific findings, to the listing reports of our members, and many things in-between. I’ll think you’ll find ample reasons between its covers to explain the name change of BC Birding from Newsletter to NewsMagazine.

Details of the AGM, extension trip and registration forms are available for download in the Annual Conference area under the Events tab above, plus you’ll find them inside the NewsMagazine. Get your registrations in soon; we’re looking forward to seeing everyone in Pemberton.

Also in BC Birding you will find the announcement of the inaugural recipients of the BCFO Young Birder Awards. As this new award is of interest to the wider birding community in addition to BCFO members, we are reproducing the article here to give these great young birders they recognition they deserve.

BCFO is pleased to announce the inaugural recipients of the newly established BC Young Birder Award that welcomes talented young birders into the BC birding community and recognises their accomplishments, contributions to, and engagement with birds and birding in the province.

To be selected for a BC Young Birder Award, recipients must be 16 or under and have:

•        exceptional observational and birding skills well beyond the ’novice’ level

•        shown substantive engagement in the activities of the birding community
•        though their accomplishments, participation, and contributions

•        been nominated and seconded by BCFO members

In alphabetical order, the 2014 recipients are: 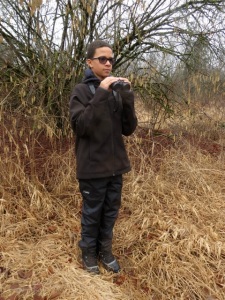 Khalid is a grade 9 student from Burnaby who has impressive field identification skills. His facility for making correct identifications for difficult, confusing, and challenging species is exceptional for his age. He is also a very careful observer, and because he reads widely in the literature he knows when he sees something important. In the summer of 2012 while vacationing in the Chilcotin on Puntzi Lake, Khalid recognized the significance of his observation of unfledged young pelicans on a small island in the lake. He had made a significant discovery: the hitherto unknown second breeding location for American White Pelicans in BC. Khalid is also a BC Coastal Waterbird Survey participant.

Liron, 13, lives in Vancouver where he has been birding since age 6. He says he has “been into nature pretty much since I could talk”. An avid poster to several of our local birding forums, including “Birding in BC,” he has posted over 800 items to date. Many of these are presentations of his bird photography, and others are responses to queries about bird IDs or advice on finding certain birds in the area. Liron’s photos are not just a series of images, but always have informative accompanying text. Since the end of 2011 he has regularly entered sightings into eBird, and has submitted over 328 checklists, including the 100th million eBird submission, for which he was widely acknowledged and interviewed. He has been a very active volunteer for the Stanley Park Ecological Society for the past three years, participating in several types of bird surveys and making short presentations.

At age 13 Logan has already established himself as an active and familiar face in the Okanagan birding scene. He is well known for his sharp eyes, keen ears, and constant bird-related questions. Logan submitted close to 300 eBird checklists in 2013, and is a frequent poster on “Birding in BC”. He regularly summarizes and posts on the birding activities of the Central Okanagan Naturalist Club and shares birding stories and photos from his local patch on his personal blog. An avid amateur nature photographer, he is one of the most active birders in the Okanagan, spending hours in the field each week.

Each recipient receives complimentary membership in BCFO until age 16, and a formal plaque in recognition of their achievement.